This post is not about graphic design theory ,but about being playful and looking at generating inspiration applying very basic methods.

I have recently discovered that although I have spent past two years trying to learn graphic design I don’t know much about it yet. I am coming from art background and doing creative things is something I do since I was seven years old.

Two years ago I have finally discovered that to remain in creative field and survive I need to do something what can generate income. Shortly the graphic design became my main focus and I wanted to learn it and retrain myself.

I have done several course and since money were and still are bit tight I couldn’t afford to go to university. I am than improvising and doing max 1 year courses and now I went for something even shorter and that is one week. It is a Graphic Design Summer School at City Lit, where anyone can try anything and maybe make a career change after.

Now I feel I have written enough and it is time to show what we did the first day.

We started with this a creation of letters from a geometric shapes. If you wonder what they are they are all ice cream flavors. I think it looks really cool. There was about nine people so this is what we created.

In the afternoon we did something else which was also brilliant. With the previous exercise we couldn’t choose the flavor it was random pick and same applies for the second exercise.

All the words above are consisted from nine letters and all are a collage of letters from magazines. I think this idea is just great when one is stuck over some design work this can really help to get moving.

Last task was slightly different each of started with one letter and than passed it on to the person sitting next. 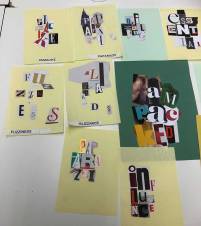